On April 30th, Dr. Lisa Sturtevant - Chief Economist Virginia Realtors & Dr. Terry Clower - Washington DC economist and head of Center for Regional Analysis at GMU, presented to local Realtors. On May 13, 2020, Dr. Lawrence Yun, Chief Economist for the National Association of Realtors, made a national presentation to all Realtors. The following is a synopsis and key take away from these presentations.

Before this year, the US has had 10 years of solid economic growth as evidenced an average 2% GDP growth during that period.

In March of 2020, as the Coronavirus pandemic spread, countries and US states began to shut down, causing the economy to slow. This caused quarterly Gross Domestic Product (GDP) to fall. A bright spot is that the low mortgage interest rates kept the real estate market expanding as January & February had record months for business volume while prices increased versus the prior year.

During the pandemic, federal, state & local guidelines limited work based on essential services unless these could be performed from the home. This shut down most of the leisure and hospitality industry, as well as education, retail, professional & business services, and, manufacturing.

The DC area has a much higher amount of office worker in technical sectors than most major metros. As such, many of these workers are able to work from home, and our area unemployment is lower than national. Conversely, industrial and tourism-based markets will take the hardest hit.

Federal government Cares act extended unemployment an additional 13 weeks, and added $600/week to what is paid by the state. This coupled with what states pay, will keep much of the unemployed in a better financial condition, than had this not come about. The chart above shows the average net difference by state of people receiving these benefits versus their previous incomes. Higher cost markets drive the biggest income impact on the unemployed. Virginia unemployment benefits range from $54 to $378. Maryland unemployment income ranges from $50 to $430/week. DC unemployment benefit, have a maximum weekly benefit of $425/week.

Nationally, the inventory, amount of homes available for purchase, has not been this low in 20 years. Meanwhile buyers are making aggressive offers causing properties to sell very quickly. Metro DC area has an even tighter inventory situation with the market still favoring the sellers.

The low inventory and high demand are pushing up prices in general, and more so in the Metro DC area which has seen extremely low inventory with many properties getting multiple offers, driving prices above asking. Thru February, the average offer was over asking. In the last two months, although volume is down, there are more area buyers than sellers, and sellers are generally getting their asking price. 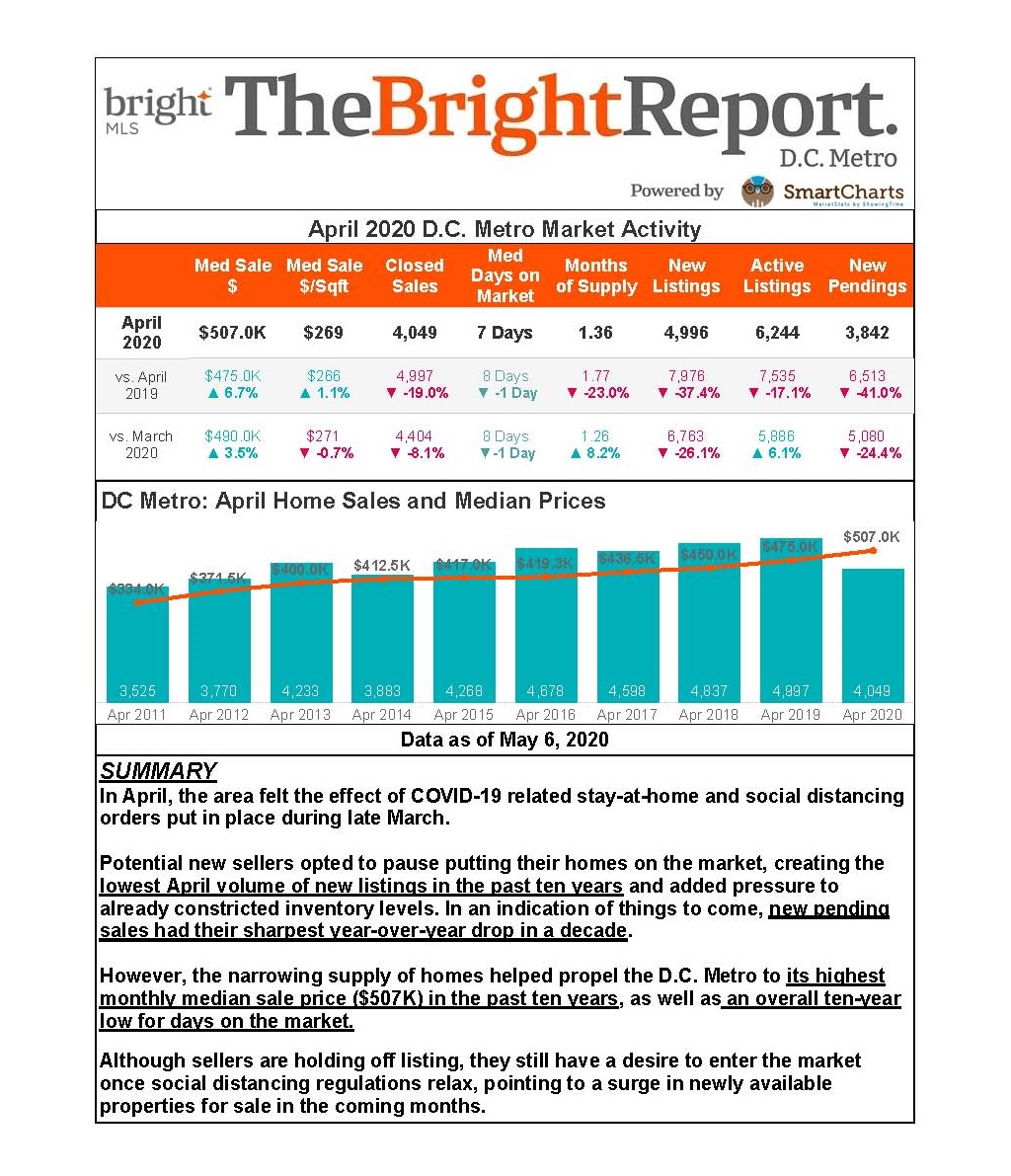 Nationally, pending contracts began to go down as most of us had concerns with the pandemic. However, the graph seems to suggest that in April, principally later part of the month, many buyers were ready to act to move on with their lives. The most affordable homes still have strongest demand.

The shortfall in sales is less due to demand than it is on concern with the virus. About half of buyers and sellers have elected to put on hold their plans. This suggests that there is still much latent demand to sell & buy.

Nationally, the days it takes to sell a property is now around 30 for those going under contract. Per the prior Bright MLS chart, the DC Metro area is around 7 days from active to under contract. This shows that buyers are continuing to act swiftly, with many properties receiving multiple offers.

This chart reflects the immediate impact that closing states/etc. had as mortgage applications quickly dropped, but have begun to pick up in April. Another impact on lending is the higher credit score required on mortgage loans, and particularly low liquidity causing a cash crunch with lenders. This is affecting lender's ability to offer "Jumbo" loans, those loans over $765,600 in Metro DC area. This may slow the market for homes over $1 million.

Record ever low mortgage interest rates have created affordability for many that could not buy what they previously wanted. The recent 1% drop-in interest rates increase what can be purchased by about 15%. Hence, buyers can buy more home for the same payment as a smaller home before. This has also caused a rush to refinance, so lenders are extremely busy.

The 2007-9 financial crisis affected the ability for builders to seek financing. This caused new construction to slump. As more financing became available in the last 5 years, their ability to build has grown. The country still has a shortfall in housing, more so in growing markets.

As inflation has gone down from the highs in the 1980's, so have mortgage interest rates continue their downward slide.

The economists foresee a fairly stable period over the next 3-4 years as things turn around and the economy gets moving forward. As such, due to the high debt undertaken to keep us all afloat, future inflation and mortgage rates are expected to rise, along with property appreciation. Rents will probably rise comparable to home price appreciation in most growing markets.

Since this virus has impacted so severely business in the second quarter and real estate as well, the forecast is for things to begin to turn around for the summer and continue to grow for the fourth quarter.

It is no surprise that GDP will contract this year, and that all jobs lost will not come back. However, the economy had been moving along well and is expected to continue to do so moving forward.